Omo bendel was first released in March 2014 featuring American based award wining rnb singer Fame @famousfamee . The song gained massive response from Bloggers and Radio Station In Nigeria and Abroad because of it's " Black Culture " infused lyrics and hook "Omo Bendel " setting a flashback to the origination of Edo and Delta State. The song is a reminder to her people that we are one race only different in culture so we should love ourselves as one and stop violence .Here is the official remix ft Fame  as produced by Micheal Xcel and mixed by @mista_nolimits .
Download and share your thoughts..
DOWNLOAD
Posted by OnlinePromoLord at 21:28 No comments:

Honorable Ehime Ehijator Isibor hails from Esan, Edo state. He was born into a catholic family of five with him being the first. He attended new Eden primary school mokola ibadan and went to sango high school to further his education. He graduated from the University of Ibadan with a law degree in 1992.

Hon. Ehime Ehijator Isibor was awarded peace ambassador because of his NGO. The inauguration of the newly appointed Ambassador for the World  Peace organized by the Universal Peace Federation (UPF) Nigeria, which took place in Abuja, at the Peace Embassy on the 1st of june, 2013. The Global Day of parents, a special day set aside by the United Nations to celebrate Parents world-wide, was also a highlight of the event. Guests in attendance included Bamanga Tukur, the National PDP Chairman, the Secretary General of the UPF, the President of UPF and other prominent dignitaries. The event was chaired by Hon. Ehime Ehijator who was nominated by the Universal Peace Federation (UPF) based on his philanthropic achievement in creating peace and his dedicated support for the fight against malaria, a major problem in the society through his Ehos Green Aid Trust.

He is married with children and based in Lagos but always travel overseas for business trips.

Hon. Ehime Ehijator Isibor is a humanitarian who takes empowering youths as a major priority.His foundation, which provides humanitarian services to rural communities. He has provided thousands of youths with jobs. He is a politician and is also a big lover of the entertainment industry due to his a profound interest for bollywood. He has been in the entertainment for the past 15 years and has directed a couple movies which include award winning 'blind justice' produced in 2001, 'love and affliction' made in 2003 and others more.

Following the success of his previously released single Somersault,Elated is back with a banging new single featuring his frequent collaborator Chuvano.This one is titled "One Boot" and is a must listen..Download and listen to it below

Email ThisBlogThis!Share to TwitterShare to FacebookShare to Pinterest
Labels: Chuvano, Elated, One Boot

Fully packed with exceptional melody,lyrics and stellar production Don k releases one heck of an addictive song that would keep you locked in from start to finish.It is quite easy to sing along to as you enjoy every bit of this masterpiece created by the very talented singer.
Produced by Yk beats and mixed and mastered at Docside Theatres this one is titled "The Location",Download,listen and enjoy it below

Email ThisBlogThis!Share to TwitterShare to FacebookShare to Pinterest
Labels: Don K, The Location 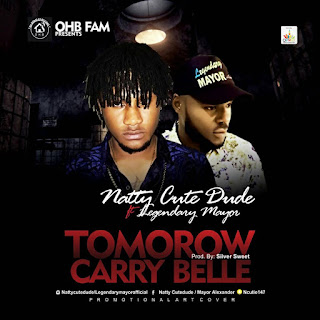 Ugbaja Bonaventure popularly known as “BeevLingz” is a Delta State born, Lagos based Singer/rapper, songwriter and DJ. His passion for, and versatility in music can be felt in this well cooked jam titled "MADE IN CHINA" When it's Puffy T on the beat, you can never ever get it twisted. The song was Mixed & mastered by “Swaps“.Download,Listen,enjoy and share!

Email ThisBlogThis!Share to TwitterShare to FacebookShare to Pinterest
Labels: Beevlingz, Made in China

Young and fast rising artiste drops another massive tune produced by Mr fancy..this one is titled Let em know and its definitely banging on your speakers!!!Download it below and dont forget to share

Posted by OnlinePromoLord at 22:14 No comments:

Here is Coblaze, a music producer and an Artist preaching the gospel of Christ through good music to the ends of the Earth. He has come out with this new spirit filled and passion driven single titled WHERE WOULD I BE. Believe me on listening to this you may be compelled to set it on repeat. ... Enjoy listening and be blessed.

Email ThisBlogThis!Share to TwitterShare to FacebookShare to Pinterest
Labels: Coblaze, Where would i be

MUSIC: Ak - Falling for you | @ak_brizzy

Here is a fresh tune from young rising star Ak  titled Falling for you.After listening to this song its safe to say its a sure hit,waste no more time..hit the download button and dont forget to share..

Posted by OnlinePromoLord at 03:44 No comments: