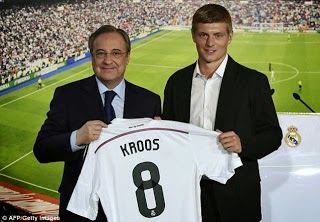 Toni Kroos has successfully completed his £24million move to spanish club, Real-Madrid. T
he former Bayern star who signed a six-year deal with the UCL Champions was unveiled at Madrid's Santiago Bernabeu today.
' 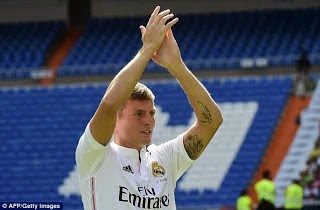 I know that at this club you are expected to win trophies but I'm the right man for that because I'm used to winning. I know this is the correct decision and I'm very proud to have made it. I cannot think of anything more wonderful than being here. This is the biggest club in the world. In 2013 I won the Champions League and in 2014 Real won it, and I hope we can win it again next year. I hope to be able to return the confidence this club has shown in me.'
Posted by naijagrip at 20:29