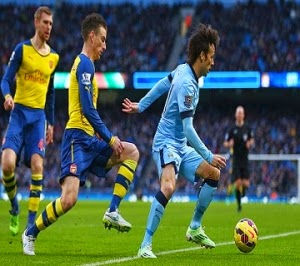 Goals from Santi Carzola and Olivier Giroud gave North London giants, Arsenal a two nil victory over defending champions, Manchester City, in the premier league.
A penalty in the 24th minute converted by Spanish midfielder, Carzola put the away side in front before the French striker, Giroud, put the game beyond the home side in the 66th minute.
Earlier, West Ham recorded a three nil victory over Hull City, reviving hopes of continental football for the first time since 2006.
Goals from two Liverpool misfits, Andy Carrol and Stewart Downing and a third Morgan Amalfitano from wrapped the game played at the Boleyn Ground.
Source: channelstv
Posted by naijagrip at 19:40