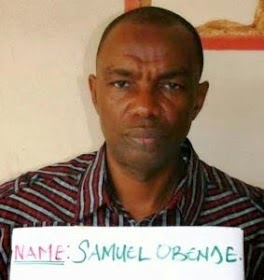 The Economic and Financial Crimes Commission (EFCC) has arrested two bankers
for allegedly stealing the sum of N661,000,000 (six hundred and sixty one million Naira) from their employers.
The duo, Samuel Obende, a Branch Manager, and Rabiu Alhasan Dawaki, Head of Operations, both of the Bello Road Cash Center of Union Bank Plc in Kano, abused their positions to perfect the heist. They were saddled with the responsibility for the evacuation and supplying of cash to about seventeen branches of the bank in Kano, Katsina, Kaduna, and Jigawa States.
In the course of carrying out their duties, they fraudulently conspired and stole the sum N661, 000, 000 (six hundred and sixty one million Naira only).
In an effort to conceal the illegal act, they fabricated accounting entries, which deceitfully showed that all the monies were sent to the respective branches.
Posted by naijagrip at 12:09