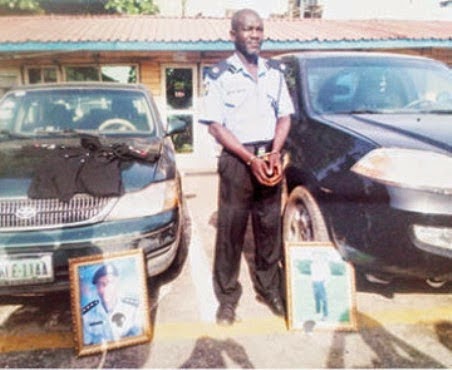 According to police reports, Illesanmi, who goes about
dressing in police uniform with the rank of a Deputy police
commissioner displayed on his shirt, was arrested after an
apprehended
notorious car snatcher and supposed pastor of a
church, Gabriel Asaolu, identified him to be one of those
who bought stolen cars from him. Continue...
Investigations by the police revealed that Ilesanmi had bought
two stolen cars, a Mitsubishi Montero and a Toyota Avalon
from the suspect before he was arrested. The insignia of a
Deputy Superintendent of Police (DSP), an Assistant
Commissioner of Police (ACP), two photographs of the himself
in DSP and ACP uniforms as well as an unregistered SUV
believed to have been sold to him by another suspect
was discovered at his home.
When interrogated, Ilesanmi said he got the DSP and ACP
insignia from a friend, whom he identified simply as Segun. He
said he used the police uniforms to help in clearing vehicles
which he deals in

“I used to deal in cars. I usually travel to the Benin
Republic to get vehicles. I would hang the ACP uniform on
the backseat of my vehicle so that customs officials
would not disturb me. With this trick, I smuggled in about
six cars between 2011 and 2014. At checkpoints, the
police and other security agencies would simply salute
me, and let my vehicle go. I did not usually pay duties at
the entry point. I sold the vehicles for prices ranging from
N1.1m to N1.5m. I got the DSP and ACP uniforms from a
friend named Segun. Till now, I don’t know where he got
them from.”
When asked how he met Asaolu, Ilesanmi replied,
“I knew Gabriel (Asaolu) as a pastor in a church at the
Oke Aro area in Ogun State. He told me he was also a car
dealer, and that he could supply vehicles to me at cheaper
prices. I had gone to the church for a revival. He also said
he was an Ondo State indigene. Later, we went into car-
selling deals. I never knew he was an armed robbery
suspect. In August 2011, he called me that he wanted to
sell some cars, but he sold only the Toyota Avalon to me.
I bought it from him for N750,000. I was using the car. I
did not sell it. Apart from smuggling, I also used the
police uniform to attract consultancy jobs from
companies in Lagos which sent their officials to me for
training. I trained some security guards for many
companies. I regret being a fake policeman, but it is just
unfortunate.” he said
Posted by naijagrip at 12:18