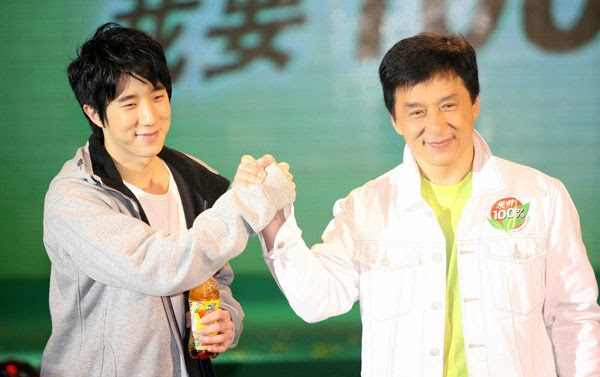 Jaycee Chan – who was sentenced to six months in jail at the beginning of January after pleading
guilty to sheltering others to use drugs – left Beijing’s Checheng prison shortly after midnight this morning, Friday, February 13, 2015 – after completing his sentence, which took into account time already served since he was detained by police last August.
A statement from the 32-year old actor’s entertainment company thanked fans and the media for their concern and said Jaycee will hold a news conference tomorrow, February 14 to ‘apologise and explain’. Speaking in court previously, Jaycee – who faced a maximum sentence of three years – said of his arrest: ‘I just gave [the police] information and I confessed because I didn’t know how to deal with the marijuana.’
The singer and actor was arrested at the same time as his friend, Kai Ko, who was released from police custody following a 14-day administrative detention for drug use. Ko testified on camera that he had used drugs at Jaycee’s home. Speaking shortly after his son’s arrest, Rush Hour actor, Jackie – who was named an official Narcotics Control Ambassador by Chinese police in 2009 – said he felt ‘angry, shocked and ashamed’.
He blogged: ‘Regarding this issue with my son Jaycee, I feel very angry and very shocked. As a public figure, I’m very ashamed. As a father, I’m heartbroken. Jaycee and I together express our deep apology to society and the public. ‘I hope all young people will learn a lesson from Jaycee and stay far from the harm of drugs. I say to Jaycee that you have to accept the consequences when you do something wrong. As your father, I’m going to face the road together with you.’...

Source: thenet
Posted by naijagrip at 11:21